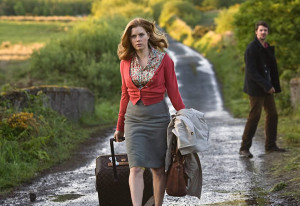 "LEAP YEAR" (2009/10) ReviewEvery four years, the date February 29 appears, leading the West's Georgian calendar to name the year it occurs as Leap Year. And Hollywood had decided to release a romantic comedy on the subject, some ten years ago.Directed by Anand Tucker, "LEAP YEAR" is a romantic comedy about a woman who learns from her father that Irish tradition holds that men cannot refuse a woman's proposal for marriage on Leap Year. Upon learning this little Celtic tradition, an Irish-American woman named Anna Brady decides to head for Ireland, where her boyfriend is attending a medical conference, in order to force her him to accept her wedding proposal. Unfortunately, difficulties nearly disrupt Anna's plans when a storm forces her plane to land in Wales. Determined to reach her boyfriend in Dublin by Leap Year, she risks a ferry over to Ireland and ends up at a small village on the Dingle Peninsula. There, she hires a surly Irish innkeeper named Declan O'Callaghan to drive her across the country to Dublin in order to pull off the proposal in time. However, Anna begins to question her feelings about Jeremy, when she finds herself becoming attracted to Declan.While watching "LEAP YEAR", it occurred to me that it reminded me of a good number of other movies featuring romantic road trips like the 1934 Oscar winning movie, "IT HAPPENED ONE NIGHT" and 1985's "THE SURE THING". Unfortunately for "LEAP YEAR", it was not as original . . . or fresh as those two films. Even worse, it did not strike me as funniest or fascinating romantic comedy I have ever seen. Hmmm. I see that I have to be brutally honest. I might as well state that thanks to Harry Elfont and Deborah Kaplan's script, "LEAP YEAR" struck me as a trite and barely funny movie. Perhaps I had exaggerated a bit. There was a good deal about Elfont and Kaplan's script - along with Tucker's direction - that prevented "LEAP YEAR" from being funny as it could have been. Fortunately, it also possessed certain elements that prevented the movie from becoming a complete waste.One aspect of "LEAP YEAR" that I truly enjoyed was the movie's Ireland locations. Newton Thomas Sigel's photography took advantage of the Emerald Isle's magic. Even during a torrential rainstorm. Another aspect of the movie that made it more than bearable for me, were the interesting array of eccentric Irish characters that Anna and Declan had encountered during their journey to Dublin. My favorite sequences featured the couple's encounter with a group of luggage thieves; an overnight stay at a bed-and-breakfast, while waiting for a Dublin-bound train; and a wild wedding party, where Anna eventually made a fool of herself.But the main aspect of "LEAP YEAR" that made it more than bearable for me were the two leads - Amy Adams and Matthew Goode. The screenwriters created two characters that struck me as a little extreme. Anna Brady is such a straitlaced and humorless character that she almost seemed out of place in a romantic comedy. By some magic of the cinema, Amy Adams managed to transcend the heavy-handed character, giving her a vulnerability and touch of humor that made her likable. While watching this movie, it occurred to me that in the hands of a lesser actor, the Declan O'Callaghan character could have ended up as a bitter man, with an excessively cynical sense of humor. But Matthew Goode's performance did something to the role. I believe the actor may have injected the character with some whimsical humor and romance that made it easier for me to accept the idea of Anna's view of Declan changing from dislike to love.Although "LEAP YEAR" managed to earn as twice as its budget, it really did not emerge as a box office hit. In some ways, I could see why. Anand Tucker's direction, along with a script written by Harry Elfont and Deborah Kaplan failed to do this movie any real justice. There is no way I would spend money to see this film at my local movie theater. However, I cannot completely dismiss "LEAP YEAR". Thanks to Newton Thomas Sigel's photography, an entertaining array of Irish supporting characters and especially the performances of Amy Adams and Matthew Goode, I ended up enjoying the movie . . . despite itself.