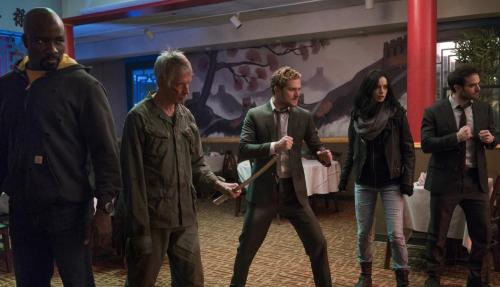 
1. (1.03) “Worst Behavior” - Danny Rand aka Iron Fist’s efforts to reach the headquarters of the Hand leaders lead to a final team up of the four Defenders. Meanwhile, the secret of Elektra Natchios’ surprising re-appearance is revealed.

2. (1.06) “Ashes, Ashes” - Stick, a martial arts mentor and enemy of the Hand, reveal the connection between the evil organization and Danny. Meanwhile, the latter finds himself sidelined by Stick the other Defenders. And Alexandra Reid encounters difficulties being leader of the Hand and Elektra’s new mentor.

3. (1.01) “The H Word” - In this premiere episode, the four Defenders - Danny, along with Luke Cage, Jessica Jones and Matt Murdock aka Daredevil - and their friends investigate separate mysteries involving the Hand and a potential apocalypse for New York City.

4. (1.08) “The Defenders” - In this final episode, New York edges closer to disaster, while Elektra sees what is beyond the wall. The Defenders, Danny’s girlfriend Colleen Wing, and N.Y.P.D. detective Mercedes “Misty” Knight make a last-ditch effort to save the city from the Hand’s plans.

5. (1.05) “Take Shelter” - The Hand’s control over Elektra is questioned. Danny’s girlfriend and colleague, Colleen Wing, has an unpleasant reunion with her former mentor, Bakuto. And Luke manages to capture Sowande, one of the Hand’s leaders.

6. (1.07) “Fish in the Jailhouse” - Matt, Jessica and Luke embark on a desperate search for Danny, who had been kidnapped by the Hand, thanks to Stick’s failed machinations. Colleen and former nurse Claire Temple debate over heroism, while hiding with the other friends of the Defenders. And Elektra tries to convince Danny into going along with the Hand’s plan.

7. (1.02) “Mean Right Hook” - As the Hand’s conspiracy takes shape, Matt decides to investigate the mysteries surrounding it. Jessica investigates another lead and finds herself in trouble with Misty and the N.Y.P.D. Luke, along with Danny and Colleen, investigate separate leads, leading into a brief and violent encounter between the two men.

8. (1.04) “Royal Dragon” - The Defenders finally get to know each other and discuss their separate investigations during dinner at the Royal Dragon restaurant in Hell’s Kitchen. Their dinner is interrupted by Stick, who had escaped from the Hand and also by Alexandra Reid and her minions.

Posted by Juanita's Journal at 5:25 PM