Top Five Favorite Episodes of "THE CROWN" Season One (2016) 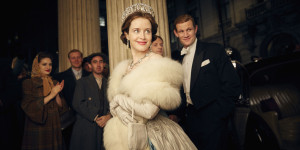 Below is a list of my favorite episodes from Season One of the Netflix series, "THE CROWN". Created by Peter Morgan, the series starred Claire Foy and Matt Smith as Queen Elizabeth II and Philip, Duke of Edinburgh:
TOP FIVE FAVORITE EPISODES OF "THE CROWN" SEASON ONE (2016)

1. (1.02) "Hyde Park Corner" - Due to King George VI's poor health, Princess Elizabeth and her husband Philip, Duke of Edinburgh embark upon a tour of the Commonwealth on his behalf. However, a family tragedy forces the couple to end their tour in Kenya and return home to Britain.

2. (1.05) "Smoke and Mirrors" - This episode focuses on the death of Queen Mary, Queen Elizabeth II's grandmother and on her own coronation over two months later. Meanwhile, the Queen's uncle, the Duke of Windsor, clashes with her private secretary, Tommy Lascelles, after being asked not to attend the coronation.

3. (1.08) "Pride & Joy" - While Elizabeth and Philip embark upon a stressful Commonwealth tour in 1954, the Queen's younger sister Princess Margaret takes on more royal engagements, much to the consternation of Prime Minister Winston Churchill.

4. (1.07) "Scientia Potentia Est" - While the Soviet Union tests their new H-bomb, both Prime Minister Churchill and Deputy Prime Minister experience major health crisis, unbeknownst to the Queen. Meanwhile, she becomes aware of her limited education and hires a tutor.

5. (1.06) "Gelignite" - When Princess Margaret and her divorced lover, Peter Townsend, ask Elizabeth's permission to get married, the latter promises to give her support. Unfortunately, Private Secretary Lascelles and the Queen Mother advise against supporting the marriage.

Posted by Juanita's Journal at 8:29 AM