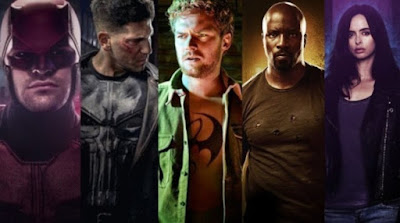 MARVEL NETFLIX AND THE SERIAL DRAMA FORMAT
I have only seen two shows from the Marvel Netflix franchise – “DAREDEVIL” Season One and “JESSICA JONES” Season One.  Overall, I enjoyed both shows, but . . . I have noticed a flaw regarding both.  I have also noticed that other bloggers and television critics have noticed, as well.
I do not think the writers for the Marvel Netflix series know how to write a TV serial drama very well.  Many have complained that their shows are “too slow”.  Let me put it another way . . . the franchise’s 13 episode format for the franchise is a deterrent for the shows and they come off as being too slow.  Frankly, I believe this is bullshit.
There have been TV shows in the past that utilized the serial drama format – especially in the science-fiction/fantasy genre or the comic book genre (which might be more or less the same thing).  But these past shows have more or less aired a season long story arc within 22 episodes.  Remember “BABYLON 5″?  “BUFFY THE VAMPIRE SLAYER”?  “LOST” (until Season Four)?  Arrowverse shows like “ARROW” and “THE FLASH”?  Until recently, even “AGENTS of S.H.I.E.L.D.” and “GOTHAM” have utilized a 22-episode story arc.
So, what happened?  When did television viewers and critics stop tolerating longer story arcs in television serial dramas?  More importantly, when did TV writers stop knowing how to utilize the serial drama format?  When did it become difficult for them to balance action and drama, while writing a season long arc within 13 episodes?
While watching Season One of “DAREDEVIL” (which I enjoyed), I can recall at least two or three episodes that seemed to feature a lot of talk and very little action. I am thinking of the episode called (1.10) “Nelson v. Murdock”, in which Foggy Nelson confronted Matt Murdock after discovering that the latter was dark clad vigilante wanted by the New York police at the end of the previous episode.  At first, I found Foggy’s confrontation with Matt rather interesting.  Eventually became somewhat boring to me.  If it were not for the plot lines involving characters like Karen Page, Ben Urich and Wilson Fisk sporadically interrupting the Matt-Nelson interaction, I would have ended up regarding this episode as a two-man stage play between actors Charlie Cox and Elden Henson.
I am not advocating less drama and more action.  I still have bad memories of Season Two of “AGENTS OF S.H.I.E.L.D.”, in which the addition of more action, at the expense of drama, nearly ruined that season for me.  Marvel Netflix’s solution to their problems – at least as far as their fourth series, “IRON FIST”, is concerned – was to shortened that series’ 13-episode arc to 10 episodes for its second season.  And yet . . . the seasons that followed Season Two of “AGENTS OF S.H.I.E.L.D.” managed to provide a better balance of drama and action without shortening its next three seasons.
Balance.  Perhaps that is the true problem with the Marvel Netflix shows.  There is no real balance between the use of drama and action in their shows.  If that is the case, I do not see how limiting the number of episodes from 13 to 10 will solve the problem.  After all, Marvel Television is only willing to do this for “IRON FIST”.  And this lack of balance seemed to be a problem with all six shows.  If the show runners and writers of the other five Marvel Netflix series do not want to reduce the number of episodes per season, perhaps they and their staffs need to learn to balance the use of drama and action in their narratives.