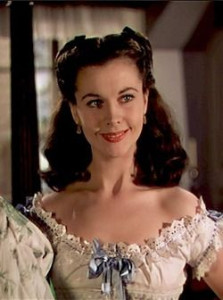 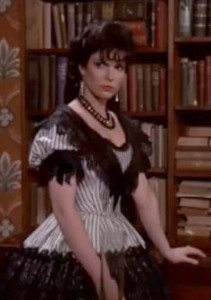 Below are images featuring my favorite costumes worn by two Southern Belle characters in fiction - Scarlett O'Hara from Margaret Mitchell's 1936 novel and its 1939 movie adaptation, "GONE WITH THE WIND"; and Ashton Main from John Jakes' 1982-1987 literary trilogy and its 1985-1994 television adaptation, "NORTH AND SOUTH" Trilogy:


I may have mixed feelings about the 1939 movie, “GONE WITH THE WIND”, I cannot deny that I really liked some of the costumes designed by Walter Plunkett for the story's protagonist, Scarlett O'Hara Hamilton Kennedy Butler.  Here are my five (5) favorite costumes:


Christmas 1863 Dress - Scarlett wore this outfit when she bid good-bye to Ashley Wilkes at the end of his army furlough around the Christmas 1863 holiday.


Marriage Announcement Dress - She wore this dress when she informed her sisters and the Wilkes about her marriage to second husband, Frank Kennedy.


Businesswoman Dress - Scarlett wore this outfit in one scene featuring her role as manager of her second husband Frank Kennedy’s sawmill.


Sawmill Visit Dress - Scarlett wore this dress when she paid a visit to Ashley Wilkes, who was manager of the sawmill she had inherited from Frank Kennedy.

I am a fan of the ABC adaptations of John Jakes’ “NORTH AND SOUTH” Trilogy.  Among my favorite costumes worn by the character, Ashton Main Huntoon Fenway, and designed by Vicki Sánchez, Robert Fletcher and Carol H. Beule.  Here are my favorite costumes:

Mont Royal Ball Gown - Ashton Main wore this gown at the ball held at her family’s plantation during the summer of 1854.


Wedding Gown - Ashton wore this gown when she married her first husband, James Huntoon in 1856.


Richmond Ball Gown - Ashton Huntoon wore this ballgown when she met Elkhannah Bent at a reception held in Richmond, Virginia in July 1861.


Day Dress - Ashton wore this dress during her first visit to Elkhannah Bent’s Richmond home during the summer of 1861 and when she was married to salesman Will Fenway in 1866-67.


Huntoon Reception Dress - Ashton wore this dress at a reception she and her husband James Huntoon had hosted at their Richmond home in November 1861.


Evening Dress - Ashton wore this dress during an evening visit to Bent’s Richmond home in August 1862.


Travel Dress - Ashton wore this dress during a visit to her family’s plantation, Mont Royal, in August 1863.


Factory Visit Dress - Ashton wore this dress when she paid a visit to her husband Will Fenway’s Chicago piano factory in 1868.
Posted by Juanita's Journal at 7:35 AM