"JANE EYRE" (2011) Review
There seemed to be certain famous British novels that are always adapted for film or television . . . over and over again. One of those novel is Charlotte Brontë's 1847 novel, "Jane Eyre". There have been twelve television adaptations and seventeen movie adaptations. That must be a world record for any literary piece. I have seen at least three television adaptations and four movie adaptations. The most recent I have seen is the 2011 motion picture, directed by Cary Fukunaga.
"JANE EYRE" - at least this version - begins with governess Jane Eyre leaving Thornfield Hall in the middle of the night, crying. She finds herself stranded on the Yorkshire moors, until she reaches the home of a clergyman named St. John Rivers and his two sisters. They allow Jane to stay with him. While staying with the Rivers family, Jane flashes back to the events that led to her flight and meeting with her rescuers. Her flashbacks begin with her last days at her childhood home, Gateshead, as a ten year-old girl clashing with her brutish Cousin John Reed and her cold Aunt Reed. The latter sends her to Lowood School for Girls, which is run by a cruel clergyman, Mr. Brocklehurst. Jane endures the brutality of Lowood with the help of a friend named Helen Burns. After Helen dies, Jane remains at Lowood for eight years, until she leaves to become a governess for a French orphan girl named Adele Varens at Thornfield. Jane becomes acquainted with the manor's inhabitants - including Adele, housekeeper Mrs. Alice Fairfax and the manor's owner, Mr. Edward Rochester. Jane's relationship with Mr. Rochester develops from an employee/employer relationship to something more complicated and romantic. But their relationship is threatened by a secret that looms over Thornfield.
This adaptation of Brontë's novel became the second one of my knowledge that was structured differently. In other words, this production began in the middle of Brontë's tale, instead of the beginning. Fortunately, Fukunaga and screenwriter Moira Buffini’s changes to the story’s structure did not harm the story one bit. As far as I am concerned. By allowing the movie to begin with Jane Eyre’s flight from Thornfield Hall, Fukunaga and Buffini set up a second mystery within the story for those moviegoers unfamiliar with the story. The 2011 movie is not completely faithful to Brontë's novel. And this is not a bad thing. Buffini’s screenplay did not focus very long on Jane’s stay at Lowood – for which I am utterly grateful. It also deleted Mr. Rochester’s prank against his female guests, when he disguised himself as a Gypsy fortune teller. This version also featured a bit of sexual tension between Jane and her benefactor, St. John Rivers. It also eliminated any reference to the latter’s romantic feelings toward a local heiress named Rosamond Oliver. Actually, the changes to Brontë's novel did not really affect my feelings about the movie. Although it garnered a good deal of praise from many critics, "JANE EYRE"drew mix feelings from many moviegoers – especially those who were fans of the novel. This mixed reaction led me to ignore the movie for nearly two years, until my curiosity finally got the best of me and I watched it.
I was relieved to discover that "JANE EYRE" proved to be better than I had originally assumed. First of all, the movie benefited from a solid pacing, thanks to Fukunaga's direction. Not only did Fukunaga kept the pacing lively enough to maintain my interest, but did not rush it . . . except in one pivotal scene. Despite re-arranging the story's structure and deleting some scenes, both Fukunaga and Buffini maintained Brontë's basic narrative. One aspect of the movie that I really enjoyed proved to be Adriano Goldman's photography. Although the story is set in Yorkshire, Fukunaga shot most of the film in Derbyshire. It did not matter, for I was dazzled by Goldman's work, especially in the sequence that featured Jane's flight from Thornfield Hall. I also have to give kudos to Melanie Oliver's editing for the smooth transitions between the sequences with the Rivers family and the flashbacks to Gatehead, Lowood and Thornfield Hall. But I am also a costume whore. And if there is one aspect of period dramas that really appeal to me, it is the costumes. And I might as well say it - Michael O'Connor's costumes for the movie blew my mind. I thought he did a superb job in re-creating the fashions of the 1830s and especially the 1840s. O'Connor earned Academy Award and BAFTA Award nominations for his work. Below are examples of O'Connor's beautiful costumes: 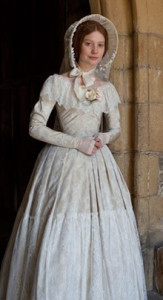 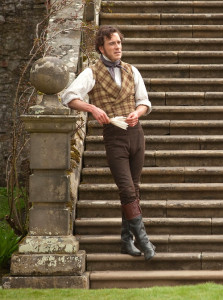 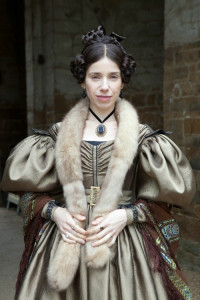 However, "JANE EYRE" is not perfect. What movie is? And yet . . . I would never consider this movie as the best adaptation of Brontë's novel. Since "JANE EYRE" is basically a love story about a demure English governess and her moody employer, one would expect the two leads to crackle with chemistry. Unfortunately, I never detected any real chemistry between Mia Wasikowska and Michael Fassbender. Lord knows they tried. They really tried. One of the problems is that Wasikowska had better chemistry with Jamie Bell, who portrayed St. John Rivers. I did not find this surprising, considering that the pair had portrayed young lovers in the 2008 World War II drama, "DEFIANCE". There were a few scenes from the novel that did not appear in this film . . . and I missed them. I do not recall Rochester's caustic recollections of his affair with young Adele's mother. And I felt surprised that Rochester's attempts to keep Jane at Thornfield seemed to be tinged with self-remorse. I do not recall Rochester expressing any remorse for his attempt to draw Jane into an ill-fated marriage and later, an illicit affair in the novel or other adaptations. I also got the feeling that Fukunaga and Buffini were trying to maintain a positive portrayal of him, following the revelation of his secret. And I must admit that I found Jane's return to Thornfield and her reconciliation with Rochester rather disappointing. Unlike the rest of the film, I believe this final sequence was rushed. In fact, once Jane agrees to marry him, the movie suddenly ends, denying moviegoers Jane's revelations about her time with St. John Rivers and his sisters and her marriage to Rochester. In other words, Fukunaga removed the story's epilogue, causing the movie to end in an abrupt manner.
The performances featured in "JANE EYRE" seemed to range from solid to the superb. Most of the solid performances came from cast members that did not have a particularly large role in the film - for example, Freya Parks (as Helen Burns), Sophie Ward (Lady Ingram), Ewart James Walters (John Reed), Holliday Grainger (Diana Rivers) and Tamzin Merchant (Mary Rivers). Harry Lloyd's performance as Richard Mason nearly made this list, but there were times I found myself wondering if he had been too young for the role. On the other hand, Romy Settbon Moore made a rather charming Adèle Varens. Simon McBurney gave a spot-on performance as the religious and tyranical Mr. Brocklehurst. But if I must be honest, it is a role he could have done in his sleep. I was surprised to see Sally Hawkins in the role of Jane's Aunt Reed. This is the second role I have seen her in and it is such a complete difference to the Anne Elliot role from "PERSUASION"that I am still trying to comprehend it.
I really enjoyed Judi Dench's portrayal of Thornfield Hall's housekeeper, Mrs. Fairfax. She did an excellent job in conveying all aspects of the charater's trait - the positive and occasionally, the not-so-positive. And she managed to utilized a soft Yorkshire accent without trying to hard. Jamie Bell's portrayal of St. John Rivers really took me by surprise - in a positive way. Mind you, St. John has always struck me as an interesting character, but Bell's strong screen chemistry with leading lady Mia Wasikowska contributed more nuance into the role. It seemed as if his St. John was a passionate man, who barely hid his feelings with a cool and socially correct persona. Michael Fassbender received a good deal of accolades for his portrayal of Edward Rochester. And there were times I believe he truly earned them by conveying the character's sardonic and brooding manner. However, there were times when I found his performance a little wooden. And as I had stated earlier, his screen chemistry with Wasikowska was not always that strong. But the star of this movie, in my opinion was Mia Wasikowska as Jane Eyre. I was not that kind about the actress' performance in the Disney film, "ALICE IN WONDERLAND". And I thought she did a solid job in "LAWLESS". But she ruled supreme in this movie's title role. She did a superb job in projecting Jane's emotions and passions with great subtlety and at the same time, conveying her character's deep sense of morality. I must admit that I found her Yorkshire accent a bit of surprise, considering that Jane Eyre came from Britain's gentry class. Despite this, I felt that Wasikowska made a superb Jane Eyre. And a part of me cannot help but wonder why Fassbender received more accolades than she.
I would not go out of my way and state that "JANE EYRE" was the best adaptation of Charlotte Brontë's novel. It possesses some flaws that prevent me from considering it among the top adaptations. But I do feel that it turned out to be a lot better than I had imagined it would be. In the end, I cannot join those group of "purists" who have condemned the film for failing to be an exact adaptation of the novel.

Posted by Juanita's Journal at 6:29 PM