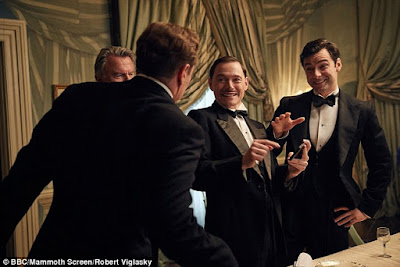 Below are some animated GIFs that I had found on Tumblr.  They featured scenes from Episode 3 of the BBC's 2015 miniseries, "AND THEN THERE WERE NONE", which was adapted from Agatha Christie's 1939 novel:

In the scene below, the remaining four survivors of the ten strangers lured to U.N. Owen's isolated island house party, decide to release stress through alcohol and drugs found in the possession of one of the guests who had been earlier killed . . .

Posted by Juanita's Journal at 5:43 PM